Now I have a Union high command piece to go with the General Lee I did a bit back: http://flashman14.blogspot.com/2014/05/15mm-old-glory-confederate-robert-e-lee.html

On deck is McClellan and then Meade at this high level of army command and then I go down a level. Each lower level of command gets a smaller base and less accompanying figures so they should be easier to finish as we go.  Since Lee was the only peerless field commander, all the other Confederates are on smaller bases.

I do love these Old Glory figures, but I am often reminded that they are very impressionistic - often details suggest something and are kind of blobby. Somehow it all works, but I'm often left wondering what the hell something is on many figures. Sometimes it's weird artifacts from the casting process and at other times it appears intentional, but to my mind remains a mystery.

I will be trimming down some of these sabre-length bayonets in future.

Thanks for looking - questions, comments and followers are welcomed and encouraged.
at 11:17 AM 6 comments:


Thanks for looking - Questions, comments and followers are welcome and encouraged.
at 11:45 AM 2 comments: 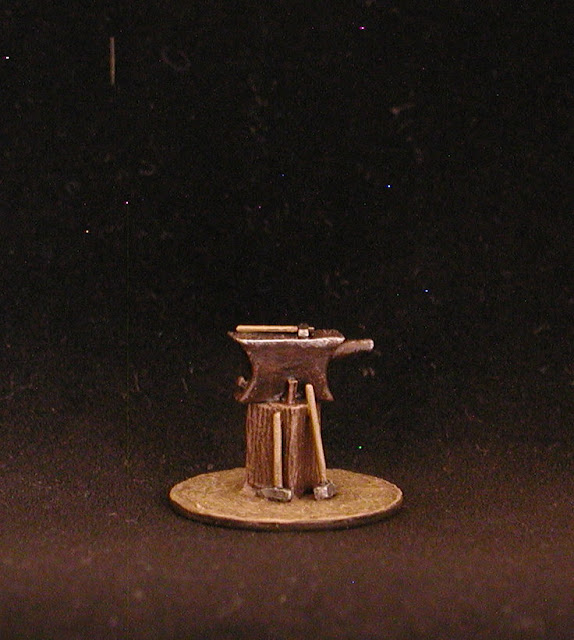 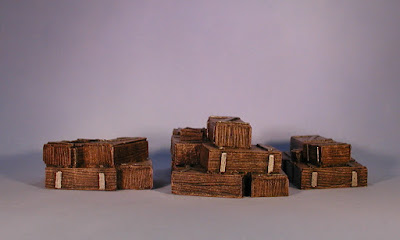 
Done with this brand, Peter Pig and Minifigs for the Pirate types - that's 223 figures if you're counting. I have over a hundred government type sailors done, (not done with bases so they remain un-posted), as well as the 54 civilians/mob and a dozen Renaissance mercenaries to fold in taking it to around 400. That leaves a bit more Peter Pig gov troops , plus all the Blue Moon and Rebel Minis to do. But, back to Napoleonics for a bit.

Thanks for looking - Questions, comments and followers are welcome and encouraged!
at 1:37 PM 2 comments:


I. This is predominantly to provide a list of what's out there and available for those of you who want to game something with Napoleonic flavor, but don't have a lot of miniatures painted up. There have been a flurry of new publications and revisions over the last couple years that I thought it'd be a good idea to catalog and organize them so you know what to pursue.

I've arbitrarily divided the large skirmish category into three categories to loosely reflect what a beginner might have on hand:
Category 1 - the RPG level:  up to 20 figures per side
Category 2:  20-60 per side
Category 3<  60+ ( I suppose you could get up to 200ish and still be a skirmish as I have planned, but we'll see. Individual companies squared off against one another seems appealing to me - on paper that's well over a hundred figures per side, but throw in auxiliary formations like a gun or a squadron of cav or other hangers on and it can cross the 200 mark quickly.)

Today I'll focus on Category 1. Most are older and geared for the Peninsula conflict, but I suppose the historians among you can find ways to tinker with them to take them into eastern Europe, North America, the Caribbean or among the many German or Italian states of the time.

As a starter I used Extra Crispy or Mark Severin's (of Scale Creep Miniatures) most comprehensive list of Napoleonic skirmish rules, past and present, that could be found. Following his categorizations I stripped off everything that was clearly battalion level or above. That's not obvious by the title and I also had to exclude the scores of blank or unknown level descriptions of many existing sets.

Of course, the appeal of the games at this Category 1 skirmish level are often counting rounds and recording wounds on individual figures. We want to be among the actual men, with maybe yourself as a personal and formidable opponent of His Majesties armies. These are the most personally interactive level of gaming, with you the player being the main character and being a significant and influential part of your force. Figures are often scaled at 1:1 or 1:5 at the max, so it's not uncommon to see rosters requiring names of each miniature with special unique skills or character traits for flavor. Ground scale is in yards if even indicated. These are mano a mano encounters.

II. Let's get on with it: In alphabetical order, here are the sketchiest of details (but with links) of the Category 1 - RPG level of Napoleonic skirmishing rules: 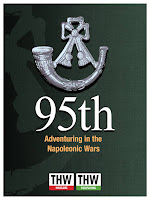 95th - Adventuring in the Napoleonic Wars! This set is fairly new from the folks at 2 Hour Wargames, and not in my possession, but I read it's based on the Chain Reaction system originally designed for WW2. The samples are those of Category 1, but it says it can be scaled to what I've defined as Category 2, depending on the number of players.

First in the Field Falls between Category 1 and Category 2. Despite the link at the end of this review, these do not appear to be available from Caliver Books any longer and I can't find any other references of substance.

Flintloque Napoleonic/Fantasy Skirmish – This one may not be for everybody, I understand the core rules would work with all human belligerents but the lore and fluff provided is positively fantastic in nature. The French are represented by Elves, the Russians, the Undead, etc. Alterative Armies has great supporting materials and tons of free stuff to go along with it, but I, at this time, would rather focus on the real thing. 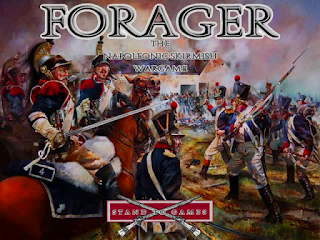 Forager: The Napoleonic Skirmish Wargame Napoleonics Skirmish -  After a successful Kickstarter, this one came out fairly recently and commands are 6 figures per side.They make a range of their own miniatures to go with the personalized character cards. 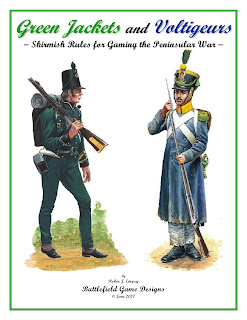 Green Jackets & Voltigeurs, Revised Ed. I've met the author, but did not get to play this one when it was being heavily demo'd at HMGS cons. I do have a copy and it is a remarkable resource in it's own right with lots of art, history, and a ton of scenarios mostly set in the Peninsula. Sharpe has a long sword indeed based on how many rule sets were inspired by Cornwell's creation. 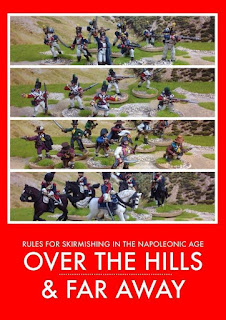 Over the Hills And Far Away V2.2  This set is from the great scratch builder Matikishi who runs one of the best websites in wargaming. This is a game for up to six players each controlling up to eight figure. 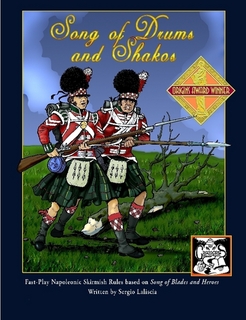 II. The following sets are in Category 2 which I may cover at a later date:
Sharp Practice 2nd Ed - This staple in many groups calls for 40-60 men per side
Osprey's Chosen Men recommends 5-20 figures per unit, 3-6 units per side = 15+ minimum  -That's potentially a small game and the commanders are personalized and customizable so it's on the fence.
Smooth and Rifled 1700-1900 Skirmish recommends “a few men per side to bigger encounters with 50-60 miniatures (or more) per side.” Looks like 20ish men per unit for Napoleonics – these are available free at the link at right.
Green Jackets Category 2 - Also free, no frills, no cover, and no art. Marketing fail, but there may be something interesting in there.10-50 figures per side and covers only Peninsula actions.

III. These are not skirmish level at all but Divisional and found only in Wargames Illustrated #49:
Through Smoke and Fire

IV. Finally, these can't be found at all, but perhaps Mark and Howard can pile in here for further illumination:
Adventures in the Rifle Brigade by Howard Whitehouse
Age of Glory - On Extra Crispy’s lists but no mention anywhere else.

I only own about half of these and I would like to go back and put in any special requirements like what dice you need or whether you need cards of some type.

Thank you all for looking. Questions, comments and followers are welcome and encouraged. If you have information that would make this entry more helpful, please post in the comments and I'll incorporate good information above.
at 6:13 PM No comments:

Email ThisBlogThis!Share to TwitterShare to FacebookShare to Pinterest
Labels: Napoleonics

Thanks for looking - followers, questions and comments are welcome and encouraged!
at 8:04 AM 1 comment: